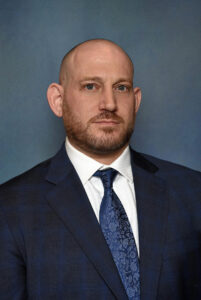 Joel is the most recent addition to the K&B team, having joined us in May, 2021. He is a competent litigator that handles motor vehicle accidents, premises liability, insurance coverage, real estate sales, and landlord-tenant issues. He also works with a variety of athletes on contract and medical coverage issues. An excellent writer, Joel crafts his motion practice and other drafting projects to the highest standards.

Joel grew up on Staten Island, but attended the prestigious Stuyvesant High School in Manhattan, New York. He attained a Bachelor’s Degree in English Literature with a Minor in Coaching from Ithaca College, in Ithaca, New York. He spent time teaching in New York City public schools while earning his Master’s Degree in Education specializing in teaching students with Special Needs. After 10 years of teaching and coaching, and another 10 years teaching Mixed Martial Arts, Joel went back to school, earning a Juris Doctor from New York Law School, wherein he was a competitor and coach of the Mock Trial Team, as well as a Student Senator and Co-President of the Sports Law Society. Joel has interned with a judge in New York City Housing Court, and advocated for under-served and under-represented tenant respondents as a Guardian Ad Litem for the New York City Housing Court and as a volunteer attorney with Legal Services of the Hudson Valley.